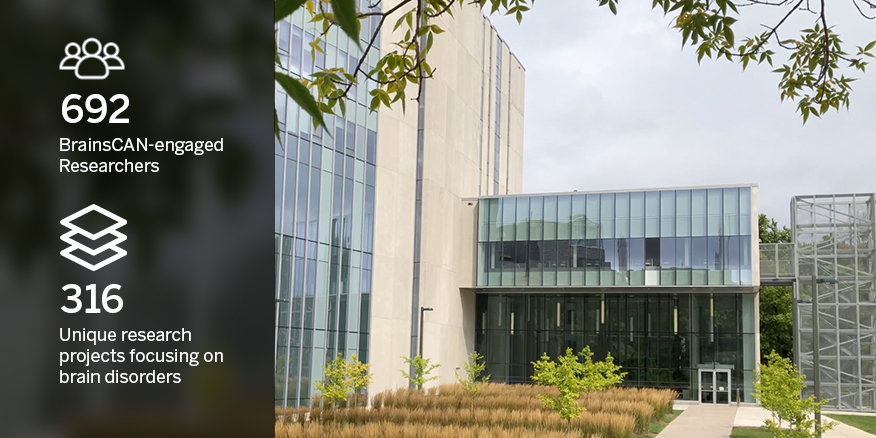 Since 2016, BrainsCAN has funded and supported high-impact/high-reward research to help transform the way brain diseases and disorders are understood, diagnosed and treated. Over the past year, we’ve added new programs, funded new research and supported open science projects with the goal to reduce the burden of brain disorders.

Granting Program Results
BrainsCAN’s Accelerator Internal Granting Program has awarded approximately $3.7 million in funding over three years. The results of the funding were made available on our website earlier this year.

The impact of the BrainsCAN Accelerator program became evident after the Natural Sciences and Engineering Research Council of Canada (NSERC) awards were announced in the spring – results of a previous Accelerator project had led to an NSERC grant.

The inaugural round of the McGill-Western Collaboration Grant was awarded in the fall of 2018, providing funding for seven research projects, totalling $3.4 million, with $1.5 million of the funding contributed by BrainsCAN.

New Funding Programs
Two new programs were launched this year supporting novel, collaborative and interdisciplinary research in cognitive neuroscience. The programs included the PDF Collaborative Research Grant Program and the PhD Studentship Program, both of which support the next generation of neuroscience researchers.

OurBrainsCAN
OurBrainsCAN is a central participant registry for cognitive research at Western with the goal to increase community involvement in brain studies. The registry was launched earlier this year by BrainsCAN’s Human Cognition and Sensorimotor Core. Since the launch, more than 600 community members have registered to take part in studies, helping BrainsCAN-aligned researchers recruit participants.

Open Science Initiatives
BrainsCAN-supported open science initiatives were launched this year with the development of Mousebytes, an open access database for cognition, imaging and genomics data integration; touchscreencognition.org, an online touchscreen behavioral research community; and the world’s first open-source data sets of NHP brain imaging. These open science platforms were developed to share data and improve our understanding of how the human brain works.

BrainsCAN by the numbers