Attempting to solve the brain’s mysteries has been the focus of neuroscientists for centuries. Over the last 25 years, highly specialized equipment has helped researchers examine the brain in more detail than ever before, bringing them one step closer to understanding the most complex structure in the human body.

Western University is home to world-renowned neuroscientists using cutting-edge technology to assist in their mission to crack the brain’s code. In recent years, this technology has helped Western researchers read someone’s thoughts, track the physical changes of a concussion, and understand how a blind woman can see moving objects.

For Brain Awareness Week, learn about some of the rare and highly specialized equipment aiding Western researchers in conquering the brain.

BrainsCAN supports highly specialized equipment through investments to its five research cores, along with support for BrainsCAN technicians who maintain the equipment and assist researchers.

AI Models of the Brain 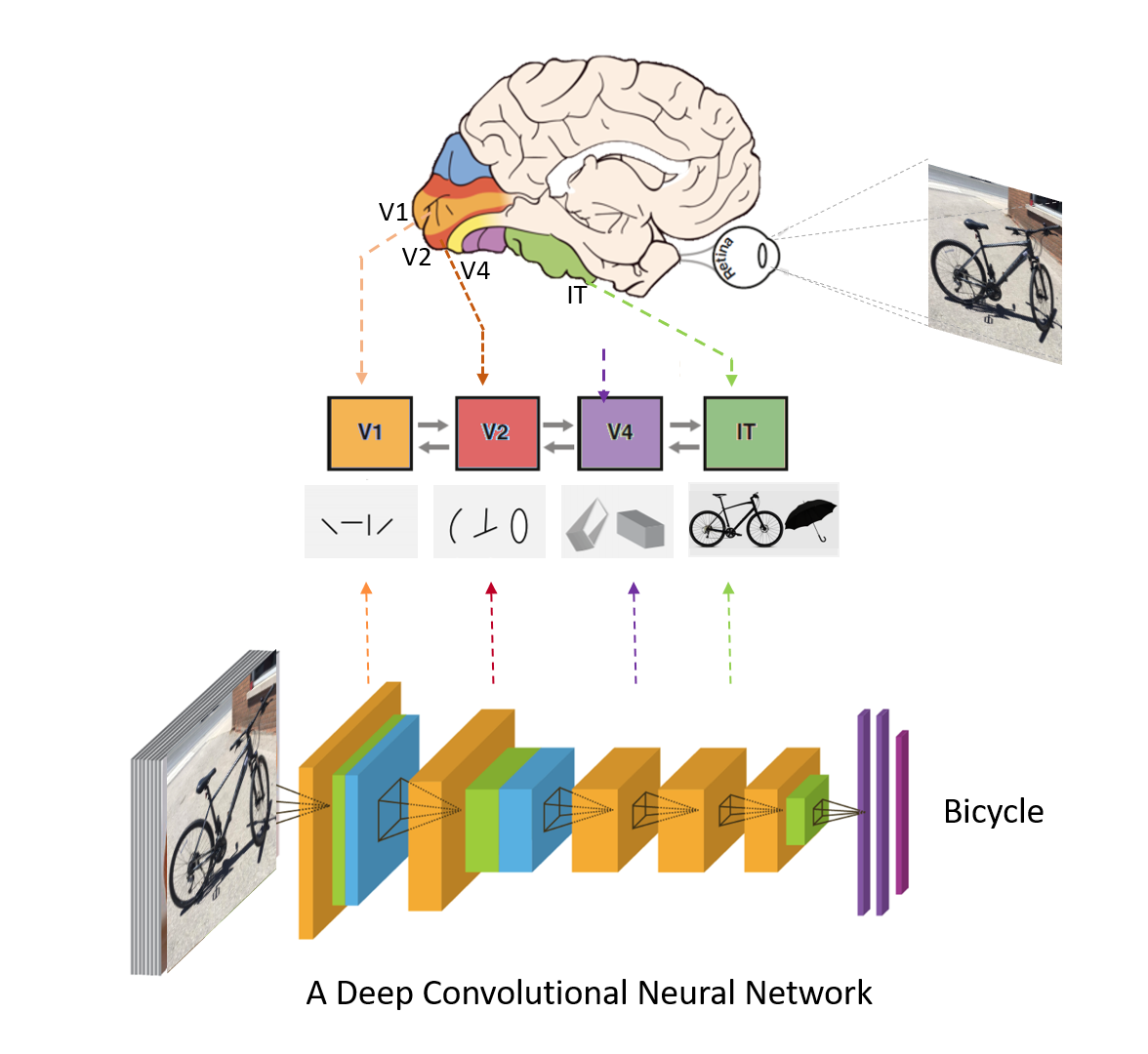 The brain has billions of neurons connected by synapses that transfer information to form our thoughts and experiences. Taking inspiration from this, AI models of the brain have computational units that act like neurons and are connected by weights, similar to synapses. Just like the human brain, these units receive information, process that information and provide an output. For example, a trained AI model of the brain can receive an image of a house, process that image and properly identify the image as a house, all in mere seconds.

Humans are constantly learning from our experiences, which change the connections or synapses between neurons in our brains. Similar to humans, AI models need to be trained to learn how to process information. Training often happens by inputting a large amount of data into the model. As the AI model is being trained, the weights between the units change. This eventually leads to it performing a specific task, such as successfully identifying an image.

“So far, these AI models have been most successful in modeling the visual system in the brain and recognizing objects,” said Marieke Mur, Assistant Professor in the Faculty of Social Science’s Psychology Department. “The next step is to train these models to learn a model of the world that allows them to predict what is going to happen next.”

Researchers at Western are currently building and teaching AI models to perform cognitive tasks similar to humans. By developing models, researchers will be able to study how to change the architecture of these networks to make them more similar to the human brain. With sophisticated artificial neural network models, researchers will better understand brain computation, or how the brain processes information so effectively. In the future, the goal is for these models to predict how a healthy brain processes information, and what happens when it becomes diseased.

“If you develop an AI model and train it to do a task like a human, then you can experiment using this model,” said Yalda Mohsenzadeh, Assistant Professor in the Faculty of Science’s Computer Science Department. “You can even remove some units and learn what would happen to performance. For example, if one part of the brain is injured, what would happen? This could be very helpful in understanding brain diseases.”

Western researchers in cognitive neuroscience and computational neuroscience are working on these AI models of the brain primarily in the Western Interdisciplinary Research Building at Western’s Brain and Mind Institute. This work is supported by BrainsCAN and Compute Canada.

Functional magnetic resonance imaging (fMRI) is a noninvasive imaging technique that uses MRI scanners to map changes in brain activity by measuring fluctuations of oxygenation in the blood.

Many have heard of magnetic resonance imaging or MRI scans. Using a big magnet, an MRI generates static pictures and is often used by radiologists or clinicians to locate tumours or lesions in the brain. The higher the magnetic field of the MRI, the more detailed the images of the brain are.

Using the same principles as an MRI, fMRI takes a series of images every one to two seconds that allow researchers to create a full map of activity in the brain. The benefit of fMRI is that it extends anatomical MRI capabilities by capturing functional changes in the brain through fluctuations in blood flow and blood oxygenation – it gives researchers a better understanding of brain activity taking place over a period of time or in response to a task.

For cognitive neuroscience, fMRI has helped researchers learn what areas of the brain are involved in memory, vision, hand movements, language and a number of other functions. In fact, it helped validate the notion that more than one area of the brain is activated when performing cognitive tasks, demonstrating that brain networks – or multiple interlinked areas of the brain – are involved. This has led to a better understanding of how the brain operates and what happens when it becomes diseased.

fMRI has also shown researchers that the brain finds other ways to reroute information if damage occurs in a specific region or in the connections between regions. With this information, which can be observed in real time, researchers have a better understanding of the brain’s ability to adapt, change and recover from some concussions, strokes and other lesions.

“fMRI is the only high-resolution non-invasive tool we have in the world,” said Ravi Menon, Co-Director of Western’s BrainsCAN and Founding Director of the Centre for Functional and Metabolic Mapping (CFMM) at Robarts Research Institute. “It’s opened the doors in terms of understanding how the normal brain works and it’s allowed us to follow the changes that occur in disease at a spatial scale and temporal scale that we’ve never been able to do. At Western, we’ve been leaders in the development of fMRI technology for 25 years, and it’s allowed us to do some pretty amazing neuroscience.”

The high-field (3T) and ultra-high field (7T and 9.4T) MR systems are located in the Centre for Functional and Metabolic Mapping (CFMM) at Western’s Robarts Research Institute at the Schulich School of Medicine and Dentistry. Supported by the Canada Foundation for Innovation (CFI), the Ontario Research Fund and BrainsCAN, the CFMM houses Canada’s only collection of the high and ultra-high field MR systems.

Functional near-infrared spectroscopy, or fNIRS, is a noninvasive imaging technique that uses light to measure changes in brain activity.

Participants put on a cap that includes light sensors called sources and detectors. These sensors send light into the brain and measure the return light signal to determine the blood’s oxygen concentrations. Measuring changes in oxygenated blood to different regions of the brain allows researchers to determine brain activity in those areas.

Since fNIRS uses light rather than magnets, it doesn’t interfere with other pieces of equipment. This gives researchers more flexibility in the environments in which they can use the fNIRS imaging equipment. For example, they can take the equipment into hospital settings or other environments that are hard to access with fMRI. They can even use fNIRS to measure brain activity for childhood development, like looking at the brains of a mom and baby interacting.

“You can imagine certain patient populations can’t go into an fMRI scanner – someone with a heart monitor, a patient with any kind of medical device, or a person on a life-assistive device that they can’t be taken off of,” said Nicolette Armstrong, Sleep and Electrophysiology Laboratory Coordinator for BrainsCAN’s Human Cognition & Sensorimotor Core. “We’re able to go into hospitals and we’re also able to go into settings where there is some movement involved, or more naturalistic settings. We can have people do real-world tasks.”

While the fNIRS equipment can be taken to different locations, it is mostly found at Western’s Brain and Mind Institute in the Western Interdisciplinary Research Building. The equipment was funded by a Canadian Foundation for Innovation (CFI) grant. 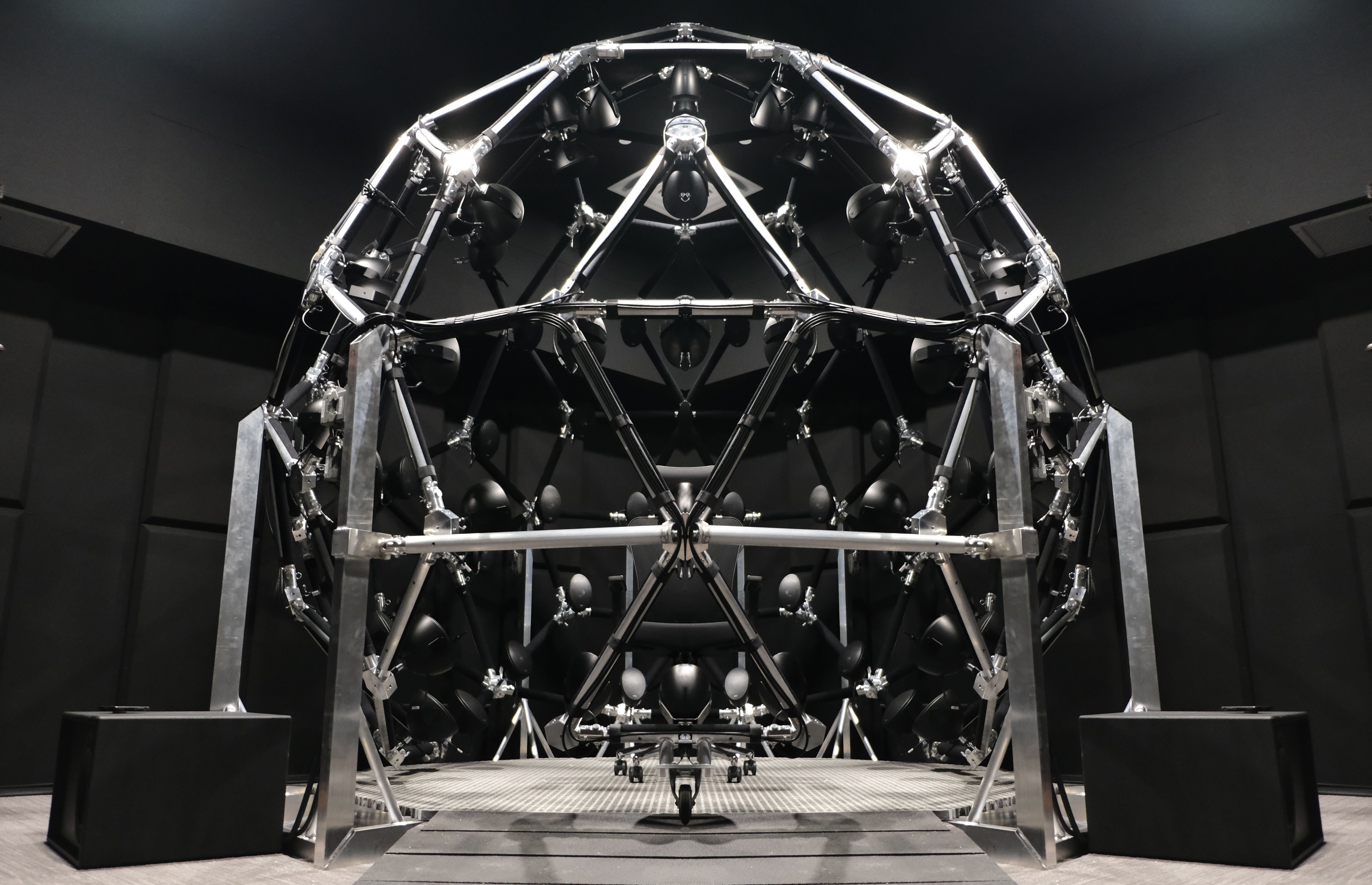 The audio dome is a virtual acoustic space that’s helping neuroscientists at Western understand how the human brain processes sounds.

The geodesic dome includes 91 speakers that immerse a study participant in a virtual sound environment. The participant sits on a chair in the middle of the dome while surrounding speakers play noises to mimic sound spaces. These spaces can be anything from a playground with children, to a cocktail party, to a busy train station. Researchers then use the speakers to emit different sounds, as well as turn off foreground voices or background noise levels for added realism. This gives them a chance to examine the brain while a participant is trying to track and understand a sound in the presence of other sounds, and can be used to examine how well participants can distinguish sounds coming from different locations. Some participants do not get the same benefit from sounds being separated in space – researchers can use this virtual acoustic space together with other tests to begin to figure out why that is.

“Auditory research typically involves participants listening to single sounds in sound booths,” said Ingrid Johnsrude, Director of Western’s Brain and Mind Institute and Professor at Western’s School of Communication Sciences and Disorders. “This audio dome provides researchers with a way to study participants in an environment that mimics the sounds we hear in the real-world, and ultimately help us better understand how the brain processes sounds.”

The audio dome is located at Western’s Brain and Mind Institute in the Western Interdisciplinary Research Building. It was supported through investments from the Canadian Foundation for Innovation (CFI) and the Ontario Research Fund (ORF). Only a few audio systems like Western’s audio dome exist in the world. 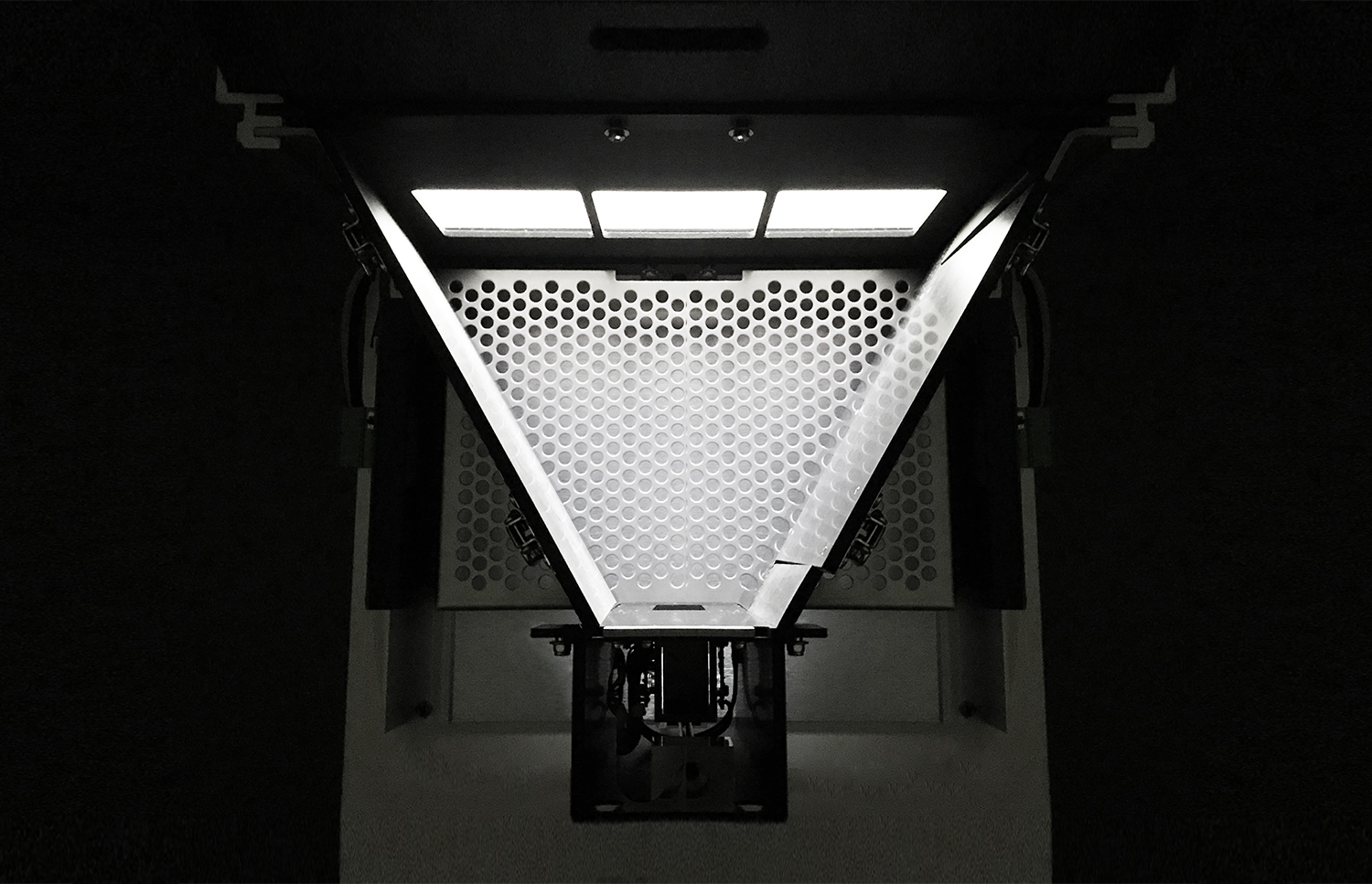 A touchscreen cognition chamber is a tool for researchers to use standardized computer-based behavioural cognitive tests on mice that can also be used with humans.

The touchscreen chambers are compartments with a computer screen and a food receptacle. The mouse is presented with a number of different images on the computer screen and makes a choice by touching the touch-sensitive screen – similar to human studies that use tablets. Correct answers are rewarded with food, typically a serving of strawberry milkshake. Using sensors, researchers can study the mouse’s behavior and determine what’s happening in the mouse’s brain as it completes a learning, memory, attention or problem-solving task.

With the touchscreen chambers, researchers can test mice using the same computer tests as they do on humans. This means that studies in mice related to learning and memory can be directly translated to findings in humans, and hopefully lead to new treatments for diseases such as Alzheimer’s, Parkinson’s and schizophrenia.

“Cognitive studies involving humans often have them touching a touchscreen or completing a video game,” said Lisa Saksida, Co-Scientific Director of Western’s BrainsCAN and scientist in Robarts Research Institute. “The touchscreen chambers allow us to do the same tests with mice, giving us better insight into how the brain works. Our goal is to improve the likelihood that research findings in mouse models will be relevant to humans, leading to new and effective therapies for neuropsychiatric and neurodegenerative diseases.”

The touchscreen chambers are located in the BrainsCAN Rodent Cognition Core at Robarts Research Institute and are supported by CFI, the Ontario Research Fund and the Weston Brain Institute.

There are many highly specialized pieces of equipment available to researchers at Western who are studying the brain. Interested in helping researchers learn more? Get involved in brain research studies. Sign up for OurBrainsCAN, Western’s cognitive neuroscience research registry.